Make your own deodorant at home 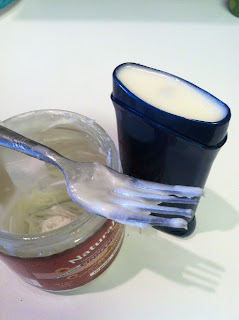 I haven't worn anti-perspirant for at least a couple of years, mainly because of all the health concerns that comes with wearning an anti-perspirant. Just do a quick search on The Environmental Working Group's Skin Deep Cosmetic Database and learn more about the dangerous ingredients used in the severely under-regulated cosmetic industry.

My old brand's label shamefully reads: "Ask doctor before use if you have kidney disease." I don't think one should have to consult a medical professional on their deodorant/anti-perspirant choices. Besides, your body was designed to sweat out toxins; why block a main outlet for the toxins to exit your body? I don't like the idea of using chemicals to get my body to stop sweating.

Since I've shunned anti-perspirants, my only option has been deodorant, which only masks the stink. I've been using a great brand, Kiss My Face - Peaceful Patchouli

, for at least a year now and have been very happy with it. However, I love homemade recipes for common cosmetic products. I came across a great one from my friend's blog: Homemade Dutch Apple Pie. Since it's going to be in the 90s all week here, I thought it'd be a good time to try out this recipe.

Here's my take on it:

Mix baking soda and corn starch in a bowl. Add coconut oil and combine, then add your essential oil. Press into an old deodorant container. To use, hold against skin and allow for the mixture to soften a bit before applying. It's recommended that you also use your hand to spread it around your entire pit.

**UPDATE** I wasn't unable to get my mixture to set properly into a deororant container, so I scooped it out and put it in a glass jar. I took about 1/2 teaspoon out with my fingers and spread it around. It was in the upper 80s here yesterday with very high humidity (felt like 99 degrees out!) and this stuff held up very well.

What's your favorite homemade cosmetic recipe?
Posted by Julie Hurley at 7:14 AM No comments:

A friend recommended a fabulous blog to me, called Heather Eats Almond Butter. On the site was a recipe for coconut butter. I've been using coconut oil for a few years now (one brand I like is Nutiva Organic Extra Virgin Coconut Oil)

, but I've never heard of coconut butter. I have read that it can cost upwards of $15 depending on where you live. I use it as a facial/body moisturizer and in my cooking. Two of my kids' favorites are on popcorn and in place of butter while making grilled cheese (it gives it a slightly sweet flavor). 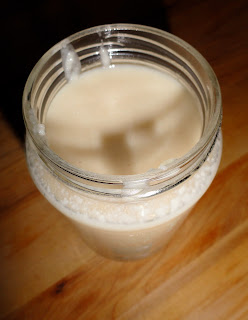 Solid at room temperature but with a low melting temperature, coconut oil is primarily a saturated fat. However, it contains medium chain fatty acids and is considered one of the good fats.

I usually just use the coconut oil straight from the jar. This coconut butter recipe from Heather Eats Almond Butter uses finely shredded coconut. I found some organic shredded coconut from Harvest Health Foods for $3.50/lb.

Here's what to do:

Take approximately 12 oz. of organic shredded coconut and place in a food processor. You'll need to process it for about 15 minutes to make sure you really get all the oils out of the shreds - it will basically liquify. Pour into glass container and let set at room temperature. No refrigeration necessary. 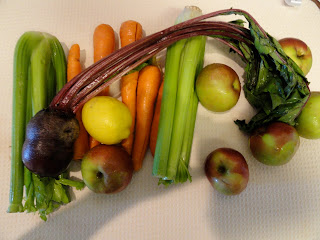 I'm currently doing a three-day raw food diet with my mom. I eat fairly healthy (on most days), but every once in a while, I can tell that my system has been overtaxed by the foods I eat (Friday Family Pizza Night, anyone?), the environment I live in and the natural stressors in my life.

I'm on day two right now and have drank my breakfast for the past two mornings. I find that it keeps me full and peps me up a bit more than the heavier granola or whole food bar that I usually eat.

This is a very basic recipe that I used for this juice, which changes each time I make it.

I've had a Breville juicer for just about a year now and I really love it. Easy clean-up and massive juicing power.
Posted by Julie Hurley at 9:26 AM No comments: 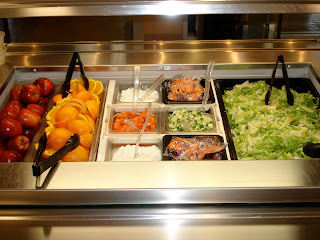 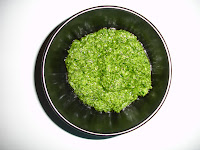 My family loves pesto. In the past, I've bought the Kirkland brand of pesto from Costco, which was pretty good and decent in price. This summer, I've decided to make my own pesto from the basil from my garden. My husband's co-worker sent me this recipe, which I was hesitant to try at first because it contained heavy cream, but oh my ... it's really good.

I served this on toasted cibatta bread with grilled chicken, mozzarella, paremesan and fresh lettuce. Later in the week, I made some quinoa and used the leftover pesto as a sauce. It was fantastic!

Put everything in a food processor and mix until you have a sauce thickness to your liking. Pour sauce into saucepan and heat until it's warmed through. While the sauce is heating, whip the heavy cream. Add 1 to 4 tablespoons of the cream to the sauce, depending on your taste (I used about 2 tablespoons). The sauce should remain somewhat thick.

Add to your favorite al dente pasta, toasted cibatta bread sandwiches, quinoa. Another great dish with pesto is cooked penne pasta, and lightly steamed veggies like broccoli, asparagus, shallots, carrots ... and whatever other favorite veggies you have on hand. Enjoy!
Posted by Julie Hurley at 6:20 AM 1 comment: 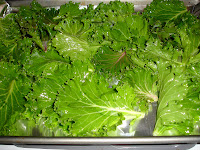 I usually don't post two days in a row, but I had to share this stupidly simple recipe for kale chips. I used the kale that I'm growing in my garden for the first time.

This healthy snack was gobbled up by my kids and me within 15 minutes.

If you can, use organic kale. It's number eight on the Dirty Dozen list for pestacide use.

Preheat the oven to 350. Take one head of kale and remove leaves. Wash and dry thoroughly. In a large bowl, massage kale leaves with 2 to 3 tablespoons of olive oil. Season lightly with sea salt and spread out in one layer on a baking sheet lined with foil. Bake in oven for 20-30 minutes, or until crisp. Remove from oven and let cool completely.

The final result is a very light and crispy chip that tastes incredible. Be careful, though, the chips can be messy because of how flaky they are. My kids ate these straight off the cooled baking sheet and asked for more right away. We'll be having fun this summer experiementing with different flavors, like adding nutritional yeast, tahini, soy, chipotle, cajun, etc. Enjoy! 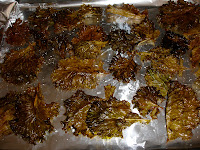 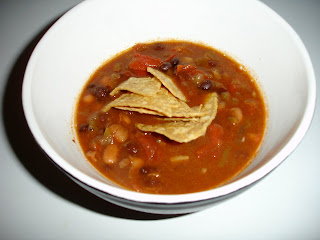 My husband and I are big fans of tortilla soup. I've tried to make it several times, but it never seemed to taste right. I finally found the winning recipe that my mom emailed me from a book called The 30-Minute Vegan: Over 175 Quick, Delicious, and Healthy Recipes for Everyday Cooking

. Even if you're not vegan, there are plenty of flavorful and adaptable recipes that the whole family will love. For example, I add cooked chicken and shredded cheese to my husband's bowl to round his meal out.

I've made it several times since the first try and it's always been a hit with the whole family. It also freezes well. I make two batches at a time to make sure I have plenty on hand.

In a medium size pot, sauté the olive oil, onion, Anaheim pepper and garlic over medium heat for 3 to 4 minutes, or until the onions are translucent. Add the tomatoes, beans, chili powder, cumin, water and soy sauce. Cover and allow it to simmer for 10 minutes or so while you prepare the avocado and cilantro.


Ladle the soup into bowls and top with a handful of tortillas and a sprinkling of avocado and cilantro.
Posted by Julie Hurley at 10:28 AM 1 comment: 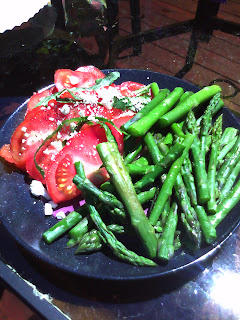 Since the weather has warmed up, I've curiously found my appetite waning a bit. Curiously because I have a huge appetite and usually have food on my mind during most of my waking moments.
A couple of weeks ago, I had ordered some patio garden containers from VP Farms on 76th Street, and when I went to pick them up, I also bought a couple of heirloom tomatoes and fresh Michigan asparagus. They looked too good to sit on my countertop, so I sliced up the tomato and steamed the asparagus. My patio pots contained, among many other things, three gorgeous basil plants, so I plucked off a few leaves and sliced those up. A drizzle of olive oil, a few turns of freshly cracked pepper and a sprinkle of feta cheese, and I had a very filling and simple - yet light - lunch.
My garden is now complete. I have four pots of lettuce (pictures coming soon), one large tomato pot, one pot of just basil (fresh pesto, anyone??), and a pot of cilantro, parsley and oregano. In the ground I have broccoli, collard greens, melon, beans, kale, cucumbers and snow peas. I have no idea what I'm doing with any of them, so we shall see what happens.
Posted by Julie Hurley at 6:43 AM No comments: 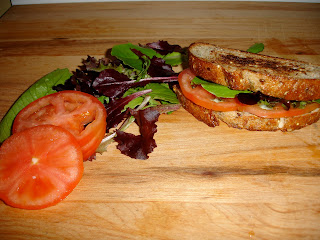 I love sandwiches, and grilled sandwiches are some of my favorites. Here's a very simple recipe for a grilled pesto and parmesan sandwich that can be made in minutes.
2 slices whole grain bread (the crustier, the better!)
1-2 tablespoons of pesto
1 tablespoon shredded parmesan cheese
2-3 slices of tomato
1 small handful of flavorful lettuce
1 tablespoon coconut oil (or butter - please, no margarine!!)
Slather on the coconut oil and assemble sandwich, leaving out the lettuce. Place on griddle pan until the bread is browned on both sides. Add lettuce to the grilled sandwich and enjoy!
Variations: Try adding grilled chicken, portobello mushroom,
Posted by Julie Hurley at 7:42 AM No comments:

Walnut, gorgonzola and cranberry salad made with lettuce from VP Farms in Caledonia 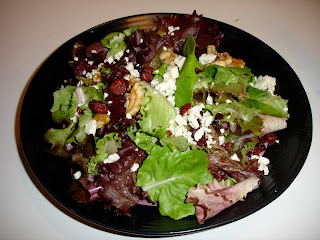 Spring is just around the corner! That means local farmers markets, roadside produce stands and greenhouses are going to start popping up all over the place. This is my favorite time of year!

One such place that opened a couple of weeks ago is VP Farms on 76th Street in Caledonia. Local home of the Vertical Garden Kit, VP Farms focuses on proving fresh fruits and vegetables as well as helping people grow their own using innovative methods of growing.

Since they also supply local restaurants with their produce, including The Green Well Gastro Pub and Bisto Bella Vita, picking up some fresh lettuce to make my favorite simple go-to salad from them is always a good bet.

Mix together and enjoy! This is a very versatile salad, and you can pretty much throw anything in there that you want. I've added: avocado, grilled tilapia, dulse flakes, sugar peas, red pepper slices, chicken - the possibilties are endless.

Posted by Julie Hurley at 6:59 AM No comments: 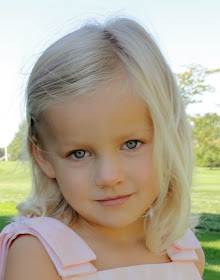 My husband and me